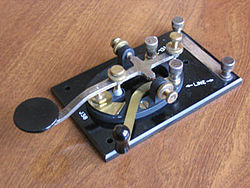 When my daughter was at summer camp one year, she and a friend devised a secret code. It involved different configurations of coughs, sneezes, pencil taps, and throat clearing sounds, and it enabled the two girls to communicate during quiet time.

Slightly evil and remarkably devious, perhaps. Hilarious? I thought so. So did one of the counselors, when I told her about it years later. We shared a good belly laugh over it.

People have been communicating without words for centuries, from drums to smoke signals. One of the best-known methods in our day and age is Morse code, although already it’s becoming something of a lost art. In my book, THE VOLUME OF WATER, one of my main characters, Mary, is a HAM radio nut. Back in the 1960s, when my novel takes place, you had to be proficient in Morse code to get your HAM license (that’s no longer the case).

Mary, lonely kid that she is, is an extreme audiophile. She hears Morse just about everywhere. A bird, her heartbeat – it’s all translatable for her. In other worse, the world literally speaks to her through Morse.

She’s not the first one to feel that way, I was rather surprised to find. A quick and unscientific Google search proves that Morse is sort of everywhere. Every subject has its nerds, and that goes for birdwatchers and rock-n-rollers as well. Case in point, the Junco hyemalis oreganus, also known as the Morse code bird. Here’s a sampling of their sound, courtesy of the Cornell Lab of Ornithology.

There are even secret Morse messages in popular music – and I’m not just talking Abba songs here. Not to suggest that Rush fans are a bunch of giant nerds, but well …

I typed the title of my book into a Morse code music making page I found, and now I can’t get the rhythm out of my head. I think it’s a rhumba. Either that, or headhunters will be here shortly. Hmmmm, wonder if there’s a way to incorporate subliminal audio messages into a query letter?