One of the fun things my main character Mona gets to do in my novel MOTHER MONA is feed the family ducks at her daughter’s cabin on Spruce Island, Alaska. When our family last visited Spruce Island, we were rather surprised to see locals keeping ducks rather than chickens. We personally own 11 pet chickens – and I say “pet” chickens because they haven’t given us any eggs in months. My guess is they are waiting for Lent, when we give up eggs, meat and dairy. Our chickens are sarcastic like that.

If you’ve never had farm-fresh eggs, you’ve practically never had eggs. When our chickens started molting (that’s a poultry-esque term for turning into a diva and eating lots of expensive chicken feed for free), we had to go back to buying store-bought eggs. It was kind of like switching to diet rootbeer … not even close.

So when we learned that breakfast would include duck eggs, we were definitely intruigued. They were delicious. If we hadn’t known they weren’t chicken, we never would have guessed – although they are quite a bit larger than chicken eggs. 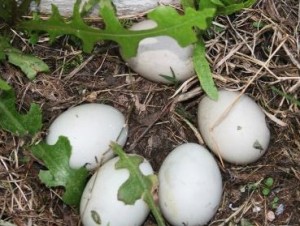 The great thing about most domestic ducks is that they aren’t food snobs. In fact, one of their favorite meals was the slugs that grow so abundantly in Southeast Alaska. Every morning, the kids would walk the plank-covered paths, plucking the slimy little dudes from the grass at the edges, getting slug juice under their nails. The ducks went crazy for them, and the kids had a blast holding the slugs for the ducks to gently grabble with their beaks. Yes, I just made up the word grabble, but it suits.

The ducks poor Mona had to contend with are nothing like the sweet-tempered creatures we visited. Generally, most domestic ducks are very nice. My fictional ducks Quick and Quack are Indian Runners, and Bear, ironically, is a Buff Orpington Duck – known for being sweet and docile. In a novel, where’s the fun in that? In real life though, they ar

e two of the most popular domestic duck breeds, producing on average around 200 eggs a year. Sometimes even more.

My characters – like our friends on Spruce Island – own ducks rather than chickens for several reasons, but primarily because they are more cold-hardy than chickens. They’re usually quite affectionate too, and on a frugal homestead, 50% larger eggs are a definite plus.

And, they eat slugs. What’s not to love about that?

For more info on raising ducks, I recommend Storey’s Guide to Raising Ducks.

Research is an important component of writing – even in fiction. Of course the common advice is to write what you know, and that advice is absolutely dead on. However, details matter. So for a writer, it pays to educate yourself.

Toward that end, I spent a wonderful afternoon at a friend’s house learning how she cooks on her woodburning stove. Mona, the main character in my novel MOTHER MONA, is a city girl who rarely cooks for herself at home. Most of her meals involve take-out or the salad bar at the local organic grocer. However, when she travels to a remote Alaskan cabin to be with her sick daughter, there’s no grocer for miles. Nor is there any electricity, gas or running water. Mona has to learn to cook on her daughter’s woodburning stove. And Mona learns, as I have today, that it involves as much art as science.

Luckily for me, today’s lesson involved baking three loaves of fresh whole-wheat bread. YUM! My friend Athanasia has been cooking on a woodburning stove for years. She’s lived the off-the-grid lifestyle for much of her life, and let me tell you she makes it look easy. 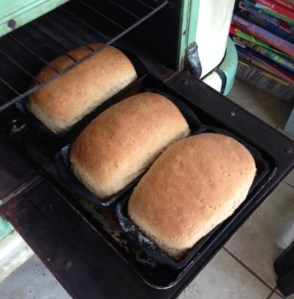 It’s not. And we didn’t even go into the wood-chopping part.

I took notes on when to close the main regulator, when to turn the bread so it doesn’t all brown on one side (because the fire is hotter closer to the wood box), how to manipulate the burner rings on top to accomodate your tea kettle or fryer (cast-iron cookware is heavy!) and how to make your house smell pretty simply by adding a bit of dried lavender buds to the bread-warming drawer.

Of course, any good researcher will tell you thoroughness is of vital import. And so, as I drove home I tore off and ate about a third of the steamy warm loaf of whole wheat she sent with me. Oh yeah!

Sadly for Mona, her first few tries at woodstove cooking come out looking nothing like this. But let’s just say that’s an area in which I already have plenty of expertise. I’ve already done that research, thank you very much.